Bannath: Hunted cleric of Yg, Father of Serpents. The Yg sect has been all but eradicated in these lands—a development Bannath intends to correct.

Danek “Armbreaker”: Dim-witted man-at-arms. A charismatic warrior once you get past the mouth-breathing and slack-jawed stare.

Malbane the Green: A novice magic-user whose talent for climbing comes in handy in a scrap.
Mars Markus: Cleric of Mog, the Spider God. Recently arrived from the Bamish lands to serve his penance in the Desert of Demons.

Mordakis the Silent: A horribly scared dwarf. As if his scars weren’t bad enough, Mordakis’ tongue was cut out, leaving him mute.

Presto: Novice sorcerer and a general font of information.

Reddannon: Red-headed cleric of Uun the Unknowable, god of the greater moon

Syl: A fighter who pursues his vocation with quiet competence. 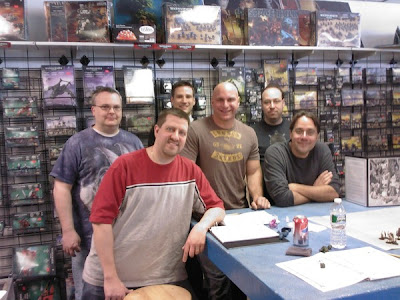 Play resumed right after the dispatching of the oversized scarab beetle and the turning of the three skeletons. As the party paused to catch their breath, four new faces entered the chamber. These four, Anwar, Mars Markus, Presto, and Ravener, were on an errand for Dhamel of the Sapphire Eye, a contemporary (and sometime rival) of Jathal the Hexmaker. Like the sextet, this foursome had business with the corpse of Athkul: his left hand was required by their employer.

Seeing as the parties’ goals did not conflict and the joining of forces more conducive for both teams’ success, the adventuring band’s ranks swelled to a half-score of intrepid tomb robbers. With some deft maneuvering by Bannath, the cleric of Yg, the three skeletons were herded away from the chamber’s exit and the band pressed on.

A writhing mass of gigantic centipedes, each the size of a man’s forearm, confronted them in the next room. The rotted bones and ancient tomb breaker’s tools mixed amongst the chittering insects attested to the danger these vermin posed to the party. However, with torches thrust at any centipede that drew too close, the band made is safely through the room and found another door leading deeper into the tomb.

Beyond that portal awaited more evidence that the adventurers were not the first to tread this way. A terrazzo floor with many of the tiles held down by rocks and driven spikes (not to mention the 8” iron quarrels sunk into the wall) bore witness to a fiendish trap guarding the room. Luckily, since the path was well-marked and caution was taken, the party successfully emerged unscathed after a slight delay.

A bare room that showed the marks of digging and defacement was encountered without incident. Next, a room with three brass oil lamps suspended from the ceiling was faced. Each lamp appeared normal, but the wicks, once lit, burned with an eerie blue flame. Although suspicions that these devices might be emitting a fatal gas were raised, no ill effects occurred and the party replenished their oil supply from the lamps to boot. Sensing their goal lay close, the party pressed on.

In the penultimate room, the ancient remains of four tomb robbers were found. Standing motionless over the corpses were two silent figures clad entirely in black plate armor. Uncertain of what they faced, the party’s three clerics stepped forth, each calling upon their deities to turn away this possible undead threat. When these invocations came to naught, Presto the sorcerer suggested that they may be magical constructions.

When arrows were launched at the metal-clad duo, the armored forms sprung into a mockery of life, swiftly joining in battle with the adventurers. A fierce battle raged and, although the band was successful in laying low these arcane creations, Danek fell in combat under their fell blades. The party had suffered their first loss of their adventuring careers.

After a moment’s pause to reflect on their own morality, the adventurers examined the room formerly occupied by the animated armor. The walls and ceiling were decorated with an elaborate mural of a night sky alive with stars, moons, planets, and comets. A search of the chamber revealed a secret door, one which opened when a certain comet was pressed. The door popped ajar and the party carefully pushed it open.

Beyond was the Athkul’s final resting place: a burnished metal sarcophagus resting atop a raised platform and flanked by burning braziers. In the smoke-laden air of the chamber, hideous semblances of life stirred. Six desiccated corpses turned their dead eyes towards the adventurers and a gaunt figure with filth-encrusted talons crouched, licking its fangs.

The dead moved with alacrity towards the party but the confines of the secret door channeled the loathsome forms directly into the party’s waiting weapons. Strangely, the faith of all three of the adventuring clerics chose to fail them at this moment—their respective deities irked by their attempts to call upon their favor to dispatch the animated suits of armor, perhaps?

As weapons flew, talons slashed, and holy water was spilled, the numbers of the dead where slowly whittled away, but not before a few almost life-ending wounds were taken by the adventurers. Syl, grievously wounded, was startled to feel the falchion he had plundered grow warm and begin to glow with a fierce blue light. Drawing it forth, the formerly hidden runes along the blade glowed brightly and the last two dead were dispatched to a (hopefully) final rest.

After a short rest to bind their injuries and fortify their spirits with wine, the party entered the final chamber. An inscription on the sarcophagus warned of fiery doom awaiting any who plundered it, but the trap was rendered inert after the clues were deciphered. Once opened, the sarcophagus was raided for the required skull and hand, as well as numerous electrum and gold coins, a kris dagger, and a strange tome comprised of numerous brazen tablets held together by wire coils.

A piece of aging parchment was discovered next to the metal coffin as well. Its contents read:

Time was of the essence as our enemies moved against us in the wake of the Master’s death. A goodly portion of his library and treasury was removed from the citadel before it was sacked, but we could not risk interring it with the Master’s worldly form, as our enemies watched our efforts like desert kites. Seek it out in the Temple of the Goat. We’ve entrusted it with the Keeper there and he will receive you warmly as fellow devotees of Ishnigarrab.

With their plunder obtained and the feasibility of carrying his corpse through the booby-trapped room debated, the party decided to inter the body of Danek in Athkul’s former sarcophagus. Rites were spoken by the priests of the Spider, Moon, and Snake, and the adventurers left the tomb behind them. As night fell, the tired, but financially more solvent, adventurers reached the gates of Rhuun….
Posted by Michael Curtis at 12:44 AM