Bannath: Hunted cleric of Yg, Father of Serpents. The Yg sect has been all but eradicated in these lands—a development Bannath intends to correct.

Danek “Armbreaker”: Dim-witted man-at-arms. A charismatic warrior once you get past the mouth-breathing and slack-jawed stare.

Malbane the Green: A novice magic-user whose talent for climbing comes in handy in a scrap.

Mordakis the Silent: A horribly scared dwarf. As if his scars weren’t bad enough, Mordakis’ tongue was cut out, leaving him mute.

Reddannon: Red-headed cleric of Uun the Unknowable (until we flesh out his religion that is).

Syl: A fighter who pursues his vocation with quiet competence. 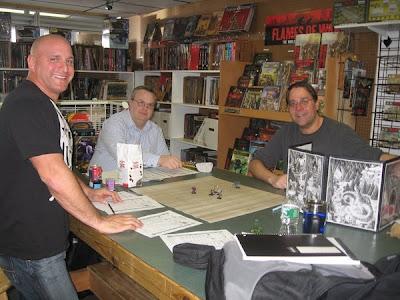 The characters had arrived several days ago in Rhuun, a trade outpost on the edge of the Desert of Demons. For different reasons, each was looking for the anonymity and opportunity that this wasteland settlement could provide. Unfortunately, a three-day-long dust storm effectively closed the town down, making sleep and finding employment almost impossible.

Just as things were about the get desperate, each of them were visited by a sending from the sorcerer, Jathal the Hexmaker, who promised them work and coin if they arrived on his doorstep before the Hour of Scorpions the following day.

The next morning saw our six PCs standing on the portico before Jathal’s house. After brief introductions and confirmation that they all received the same sending, the six were granted entrance by the sorcerer’s seemingly mute slave.

Inside, the lanky wizard offered the assembled adventurers 50 gold jitais and his good favor if they would provide him with the skull of Athkul, a sorcerer of modest repute whose tomb lay in the Hills of Scowling Bones just northwest of town. Eager for coin, the sextet departed after gathering their gear and filling their wineskins.

From a map provided by Jathal, they had no difficulty finding the lopsided pyramid that served as Athkul’s tomb. Venturing within, they found a large temple chamber which seemed empty aside from peeling frescoes, pillars inscribed with an alien alphabet, and an unearthly idol placed in a niche above an altar of volcanic rock. At least, it seemed to be an idol.

When the black-bronze and bat-winged thing launched itself from its perch to fall upon them, the PCs unleashed a hail of missiles at strange creature and striking it down before it could injure any of their band. Having proven their merit in battle, the six continued to explore the tomb, uncovering a large cell haunted by skeletons (which proved little threat with two clerics in the group), a room full of religious accoutrements (where they lifted some silver candlesticks and decided to don the midnight-blue robes they found there”just in case”), and a empty study /library that was overseen by the mosaic of a bald, bearded man. Despite a thorough search and the fact that the mosaic seemed to be focusing its attentions on a certain stone table, nothing was discovered therein.

Finding the stairs to the tomb’s lower level, the party ventured deeper into the complex. A walled-up niche was broken open to release a desiccated corpse that even the clerics’ mighty faith could not dispatch (but spears and axes could) and which held a well-made falchion of possible enchantment. A fight with a few more skeletons (quickly turned) and a giant scarab beetle (quickly squashed) left the party facing a door that leads still deeper into the complex…
Posted by Michael Curtis at 12:41 AM