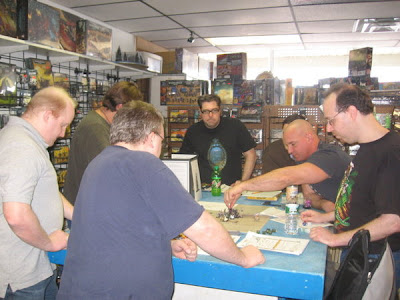 Mars Markus descended into the well and discovered that it ended in an L-shaped chamber some 30’ below the room above. A 10’ square platform lay directly under the shaft, but the rest of the room was choked with a thick carpet of humongous fungus that blanketed the room 3’ deep. At either end of the room sat stone boxes, each 10’ long, 4’ wide, and 3’ deep, with their open tops covered by metal grills.

Mars was soon joined by Syl and El Ravener, and the trio cautiously began probing the fungus surrounding the platform with the party’s every-ready 10’ pole. In one particularly thick patch of fungus, something grasped the end of the pole and attempted to pull it from the Mars’ hands. When he pulled the pole back, a vile corpse, its body encrusted with pallid fungi, emerged from the dense growth of toadstools that covered the floor.

This creature was quickly put down, but in battle it proved to be unaffected by either Mars’ turning attempts or by Syl’s undead-slaying falchion. Pushing past these strange implications, the trio began further probing the room, headed towards the nearest of the stone boxes.

The rest of the party began making its way down the well, lured by shouts of “treasure chests!” and the clamor of battle. As the reconnoitering trio approached their object of investigation, more of the fungus-laden corpses began to emerge from the dense mushroom cover of the room and advance towards both those adventurers wading through the room and those perched atop the stone platform at the room’s ingress. 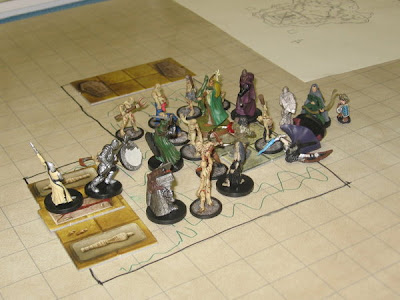 Wave after wave of the creatures appeared, but the party’s efforts were sufficient to maintain the upper hand in battle. Unfortunately, they suffered a grievous loss when Reddannon the cleric was slain, his head ripped from his shoulder’s by one of the mushroom zombies.

Amidst all the chaos and death, a strange event caught the party’s attention, although only Mars Markus was close enough to investigate. As the combat raged, two of the room’s stone boxes were suddenly illuminated by brief flashes of light which seemed to originate from under their grill-like covers. Mars peered into the strange container closest to him to discover a very confused –looking Old Blood sorcerer staring up at him. “Umm, some assistance, please?” the sorcerer asked.

After defeating the fungal menaces, the party took the time to police the fungus-coated zombies for any wealth and discovered each bore a simple, workman-like necklace of gold and silver beads. Reddannon’s remains were lifted from the room and Bannath, Mars, and Azerran gave him last rites. Mordakis the Silent, companion of the slain cleric, mourned in quietus and consumed the party’s sole healing draught to restore the vitality he lost in battle. However, that elixir’s potency seemed much reduced by the ages and his health was little improved.

Back in the pit, the rest of the party was introducing themselves to the newly-arrived Old Blood, [[:fanta Fanta]], and his companion, [[:domdull-stonejaw Domdull Stonejaw]] (who had been the source of the second flash of light but wasn’t freed from his imprisoning box until after the battle). This duo told a curious tale of exploring the massive dungeon complex known as “The Blackgut” when they ran afoul of a curious archway that must have teleported them to the Temple of the Goat.

Then, as the party was engrossed in conversation, the first of the slain fungal zombies rose to its feet, followed quickly by another and another.

In the chaos that followed, the party found themselves cut off from the chamber’s sole exit and swarmed by the suddenly revived corpses. In the melee, El Ravener, Yodahlla, and Azerran all perished in the mass of animated dead, and Domdull barely escaped with his life. Yodhalla’s body was the only one of their comrades’ mortal remains that was recoverable from the safety of the well’s opening and the rest of the dead were unfortunately left to the strange fungus zombies that haunt the Temple’s underbelly. This did not sit well with the survivors and many oaths were sworn to come back and soundly eradicate the fungus creatures, if not recover their comrades’ remains.

Even with more than a quarter of their number dead, the party pressed on. With but two outlying buildings remaining in the temple complex and still several hours remaining before nightfall, the party returned along the westernmost walkway to the first of the two remaining buildings. Inside, they discovered more of the obscene cravings which depicted the tree-monsters engaged in unspeakable acts with human victims, but nothing else of interest.

With one building remaining, they continued on the raised pathway towards it. There, after cautiously opening the seemingly long-sealed door, they discovered a water-filled building with a raised path that snaked through its interior. Four statues, three standing 10’ tall and depicting the same tentacle-faced monstrosity and a larger one of a four-faced woman, were placed about the path. A stone box sat in a slight cavity beneath the four-faced statue.

The entire setup screamed “danger” but Kliegeles, Mordakis, and Mars entered the building. Mordakis and Mars stood watch at the doorway while Kliegeles made his way along the path, probing carefully ahead with the sturdy wooden pole. Finding nothing amiss, he carefully approached the box beneath the statue, eyes peeled for danger. When nothing was detected, he risked opening the container…and the three smaller statues ground into action while the door to the building slammed shut!

As the Mordakis and Mars tried to pry the door open, two of the statues bore down upon them, and another strode towards Kliegeles. Before the Old Blood adventurer could flee, its rocky fists pummeled the life from his body and his unmoving form fell upon the walkway.

Outside the building, Fanta and Domdull worked to pry the stone door open, and with crowbars in hand, managed to get purchase on the heavy valve. As they struggled to free their trapped comrades, the first of the two remaining statues reached Mordakis. Its first blow struck the dwarf senseless and, before Mars could pull him to safety, its second blow sent the mute dwarf to the afterlife.

Moments before the grim statues could reach Mars, the party pried the door ajar enough to allow the Baman cleric to escape from the building which had become the tomb of two of his compatriots. As the party fled the scene, seeking safety in the surround hills that ringed the temple complex, the survivors of the day’s events decided that it was time to return to Rhuun in the hopes of recruiting replacement members before planning their next foray into the blasphemous Temple of the Black Goat…
Posted by Michael Curtis at 12:39 AM