My players are generous, engaging in acts that, although appreciated by me, might come back to haunt them. Case in point: The FLGS where we play each week has a display case filled with plastic minis. These figurines came from various miniature sets that have been broken down and sold individually so that the buyer can actually see what he or she is purchasing. In the last week, the store got a prodigious amount of Mage Knight sets in and the miniatures case has become flooded with odd, yet strangely intriguing pieces. Before last Sunday’s game, me and a few of the early arrivals were taking a look at these pieces and I commented that, although several of them, such as the steam-powered dwarven tank, would make excellent set piece encounters in the campaign, the $15-$20 price tags on the big models just weren't worth the one-time use I’d get out of them. 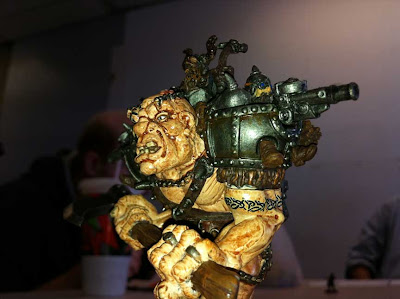 Despite my reservations, the guys really took a liking to one particular model—an “Iron Rain Hill Giant.” Standing a scale 20’ tall, the brute bears a giant axe as a weapon, but also has a boiler hanging on his back. A pair of helmeted dwarves ride on chairs strapped to the giant’s shoulders and are armed with what appear to be flamethrowers aimed outwards to guard the giant’s flanks. A third dwarf with horned helmet rides on the giant’s neck and seems to be steering him with a series of chain reins hooked through the brute’s eyebrows. It’s all very dangerous looking.

For reasons I’m still uncertain of, the guys took up a collection and bought it for me. They now want me to stat it up for Labyrinth Lord with the implication that they’ll fight it one day. As I said, they’re generous to a fault.

I certainly do appreciate the gesture. It tells me that they enjoy our weekly sessions together and all the hard work I put into making each game seem effortless. I just hope they still enjoy it when the Tijuana flamethrower-armed giant is making mincemeat of them someday…