The following is a repost from The Society of Torch, Pole and Rope, but presented here to keep all my homebrewed Wathcfires & Thrones monsters together for easy reference. 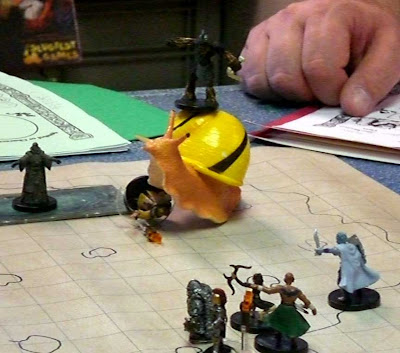 This fearsome mollusk averages 8’ in height at the apex of its gray-black shell. The creature gets its name from both its aggressive disposition and the naturally occurring pattern on its shell that resembles a stylized Death’s head similar to that found on some species of moths.

A bale snail attacks with either its rasp-like mouth or by spitting a gob of acidic mucus. This acidic spittle inflicts 1d4+2 points of damage and has a range of 60’. Anyone struck by the substance must save vs. breath attacks twice. If the first save is successful, the victim takes half damage from the attack. If the second roll is failed, the acid dissolves the victim’s armor or clothing (75% chance) or weapon (25%). Metal objects enjoy a +2 bonus to this saving throw. A bale snail may only make a spit attack once every other round.

This great mollusk may overbear its prey with its tremendous bulk. Provided the snail has enough movement to overrun it victim, it makes a normal attack roll to crush its opponent. The victim must make a save vs. petrification (modified by any STR or DEX adjustments the character has) or become pinned by the snail’s foot, taking 1d4 points of crushing damage each round. Victims pinned by the snail can free themselves with a successful STR check at a +3 penalty or be pulled free by a comrade making an unmodified STR check.

If a bale snail fails its morale check, it is 90% likely to withdraw into its shell until its attackers leave the area. While inside its shell, the bale snail has an armor class of -6.
Posted by Michael Curtis at 12:00 PM