Sorry for the delay. This week’s been a busy one. Productive, but busy. I’ve got big plans for the future, but here’s the write-up for now.

Looking up from the orc corpses they were riffling, the party beheld four human men observing them at the corner of the corridor. Dressed in chain and leather, each man was armed and bore a black and yellow checkered clothe worn amidst their garb. This new quartet took the party to be another band of “’Hell Delvers” out for loot and glory, but when the adventurers explained that they needed help finding their way out, the men grew interested.

Highly suspicious of their new acquaintances, the party reluctantly agreed to pay 10 gold marks each if they were shown to the nearest exit. As they headed off into the dungeon, bound for a supposed nearby exit, the party’s guides arranged themselves at both the head and tail of the band, effectively surrounding them. That was the last straw for the PCs, who, deciding that if anyone was getting bushwhacked, it wasn’t going to be them, sprung a surprise attack on these supposed good Samaritans when they stopped to lift a dropped portcullis. A good thing too, for these men were actually Ghost Beggar bandits.

After a prolonged combat where neither side could score a decisive blow on the other, the bandits’ luck finally ran out and the party found themselves standing over three corpses and one unconscious bandit. Dragging their prisoner back to the chapel from some impromptu interrogation, the party found that the bandit caved under the slightest bit of duress (failed his morale check abominably) and gave up the location of two exits to spare his life. The bandit, Sfroat (who was assumed to be named “Scroat” by the party, much to their amusement), explained that one exit ran straight through the bandit den, but a second, larger exit existed directly to the north. If they just headed straight that way, they were bound to find it. 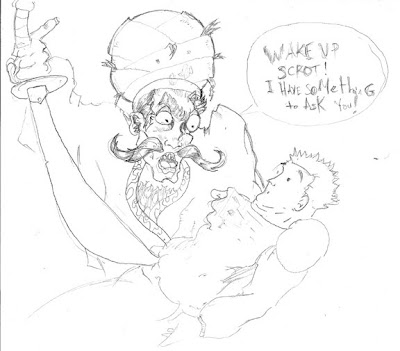 The party insisted on taking Sfroat with them, loading him down with Kyrinn’s corpse and slapping a pair of manacles on the poor bandit’s legs to ensure he didn’t go far. Setting off from the chapel, they negotiated a series of octagonal rooms on a northbound course. However, they’d had grown complacent about traps, and both Baragkus and Morg almost took a dive into a 10’ pit that barred their path (actually, Morg did take a dive trying to leap it, but that was a voluntary act of recklessness). Some careful rope and spike work allowed them to continue on, and their explorations turned up a pair of buckskin leggings and moccasins stashed in a rusty pot and buried in a garbage heap. Strange…but not as strange as Fanta wearing the ill-fitting clothing and doing wind sprints around the chamber to see if he could now run faster.

When the dirty laundry proved unremarkable, the party continued north, where they ran into a guard room of orcs. The pig-faced humanoids sprung out from behind a closed door the party was passing and nearly killed Baragkus before the tide of battle turned in the party’s favor, resulting in the orcs barricading themselves back in their room with hopes the adventurers would go away. Luckily for the orcs, the party was focused on getting out of the dungeon before something killed another one of them.

The party discovered numerous crossroads in their journey and battled a pair of wandering zombies. All the while, the air was growing fresher and Sfroat kept insisting they were almost to their destination. That’s when their journey was abruptly interrupted by the sound of voices and pale lantern light from around a corner.

Creeping forward, the party found an ornately carved room, its walls adorned with dwarven heroes and large runes. A party of five dwarves were engaged in a study of the chamber, but not so intently that the party took them unawares. In the brief parley that followed, the adventurers learned that they were just around the corner from the exit, but a trapped intersection lay in their path. At least that’s what it sounded like. The dwarves’ thick Scandinavian accents made it difficult to be sure. We also established that Fanta is going to get himself shot one day due to that mouth of his.

Following the dwarves’ instructions, the party did encounter a pit trap (rolled a “2” when they poked it with their now-remembered 10’ pole) but negotiated it by the same rope and spike technique they learned early in the day. At long last, they found themselves in Stonehell’s “H Room” and were relieved to see a spiral staircase ascend up through the ceiling, purportedly leading to the surface.

I was waiting on this moment with great interest. The party had promised Sfroat that he’d be released unharmed if he was true to his word about leading them to the exit. Although they had been relatively humane in their treatment to the poor sod (even upping his armor so that he might survive an attack since he had no weapon), they now had what they wanted from the bandit. His usefulness was at an end.

It turned out that the PCs are not bloodthirsty monsters, for they let Sfroat go, returning his dagger to him and even providing him with extra torches and offers of food before he departed. Whether this action will have repercussions should the party encounter the Ghost Beggars again remains to be seen.

Turning back to the matter of their escape, Morg and Baragkus climbed 70’ up the stairs without reaching daylight, but there was some trepidation on their part about being so far from their comrades, so the two stout fighters came scurrying back for company. Ultimately, the party pressed on past the 70’ mark and emerged in the defaced and trash strewn entrance chamber to the dungeon. Safe at last.

On the surface, the party discovered that they were indeed in a strange world, for a single moon hung in the sky. They stood at the far end of a lush valley on a warm spring night, one very different from the desert evenings in Rhuun. They decided that leaving the valley was the best course of action, despite some temptation to explore the ruins, trees, and caves they encountered. The party pitched a camp just beyond the ruined gatehouse that blocked the entrance to the valley, where they got a fitful rest as stirges dive-bombed them and small figures emerged from the gatehouse to observe them. However, they lived to see morning.

Putting the valley and Stonehell to their backs, the party descended from the mountains down an old military road which ultimately lead them to a more travelled highway. Atop a post at the crossroads was an arrow that read “Blackpool” and pointed to the east, so toward the rising sun they headed. An hour later saw them on the edge of a broad, slow-moving river with numerous saw mills on their side and a small town surrounded by a wooden palisade on the other. A small keep and a large timber manor looked down on the settlement from opposing hills and forest stretched off to the north.

Crossing a well-constructed stone bridge brought them to the entrance of the town, where a helpful guardsman collected their silver guilder toll (“The corpse and the dog can come in free.”) and informed them of the Fortunate House (a temple to Chance), the Sanctuary of the Sovereign Flame (the church of the Sovereign), and the Stag’s Rock (shrine to Hyrn the Hunter) if they were looking for curative magics. He also suggested they stop by the “Mad Manor,” that large timber hall atop the hill, if they were looking for lodgings and to join the adventurer’s order.

The party stopped in at the Sanctuary, walking past townsfolk with a corpse on Baragkus’ shoulders without comment from the locals (giving them some idea about what kind of visitors the town is used to) to get there. Inside, the local priest of the Sovereign informed them that he could hold a very nice funeral (25 gold marks) but could do little else for the poor Kyrinn. Lyrax donated a decent 5 gold to the church, which may be remembered in the future.

With nothing else to lose, it was back out of town and up to the Mad Manor to see what that was all about. At the top of the hill, they found a crumbling ruin of a mansion. Repairs were lacking, the roof was sagging, a noose hung from a tree, and two leering gargoyles had been splattered with so much paint they looked tie-dyed. Or as one player summed it up: “It’s a frat house.”

Yes it was, and the party was thinking twice about hanging around once they got inside. The place stunk of unwashed laundry, rotting wood, cheap booze, cheaper perfume, smoke, sex, and old cooking. The thin clerk behind the counter seemed less than enthused to meet them, and a giant of a man came down the stairs with a body wrapped in a sheet to inform them they had a vacancy if they were interested.

The party passed on talking up residency for the moment, but did express an interest in learning more about the adventurer’s order, and a helpful magic-user appeared to give them the specifics. For a somewhat steep fee of 100 gold marks per “category of renown,” they would become members of the guild and receive several benefits in the form of professional appraisals of goods and magic, reduced training cost, cheap lodgings, and access to the chapterhouse’s library. The fee would just about wipe out their savings, and we closed the session with the party in debate about the wisdom in becoming “professional” adventurers.
Posted by Michael Curtis at 12:54 AM